I got up this morning and had a lazy morning on the bed. I watched the news and my morning drama before going downstairs for breakfast.  As I was downstairs I was able to say a quick hello to F’s sister. She brought us some vegetables and fruit which was nice of her.

I had a very quiet day. I spent most of the day on my computer. I completely forgot to do some laundry. Oops.

When F came back to the house I assumed we’d do bentos or go out because I didn’t feel much like cooking. I did sort of plan to cook but wasn’t sure how pasta would go over since K and F both had ramen for dinner last night.

F said it was okay for him to have pasta tonight so I whipped up dinner. We had a salad in the fridge, so we had that, with yuzu-shoyu spaghetti, and a duck breast that I was keeping for a day like this. It came together fairly well so yay me.

After dinner, F washed the dishes and I got to dry them. F does it a completely different way than any sane person would, but what I need to focus on is that they get done!

After he dispatched his duty in his eyes, he left and I did the rest of the cleanup. I cleaned the stove which was dirty when I got there, emptied the sink’s garbage and washed my container for making cold tea in.

I went upstairs and I was soaking. I was so sweaty. I know that F thinks downstairs is cooler, but I was working hard down there!

I wanted to go out and F wanted to stay in. I really needed some groceries for myself so F agreed to go out. He went to the onsen and I came along with him.  After that, we had a drink in Komeda and stayed there a bit too long if you ask me.  When we came out of the coffee shop, F was ready to go back to the house. I reminded him about the grocery store.

We bought a few things. I wasn’t inspired by anything to make dinner tomorrow night, so suggested we do a bento run tomorrow night. It’s supposed to be rainy tomorrow, so going out will be nice.  I tend not to go out in the rain at all!

We came back to the house and I took a shower and watched a little bit of TV. F was trying to sleep I think. He isn’t feeling that great, but a co-worker is off sick so he can’t take time off now.

And, we might have plans for the weekend.  A friend’s husband is going to come fishing in the area again and we’ll go and meet them if all goes well. If the weather is bad, we might not go.

Oh, yes, while I was at the onsen with F tonight, I saw this t-shirt with its lovely Japlish on it. They are so close to being right if only they’d had someone who could speak English proofread it! 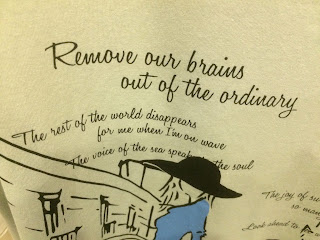 So that is it for me. It was an okay day. I hope that tomorrow is going to be okay too.  Until tomorrow….
Posted by Helen

Helen
I'm a Canadian married to a Japanese man living in a small Japanese city. Life can be either very interesting or very boring here!

The White Castle
by Orhan Pamuk
I didn't really like it. It started well, but got strange fast. It was a bit of a struggle to finish it. Not my cup of tea!

Unbeaten Tracks in Japan
by Isabella L. Bird
As I read this book I had a couple of thoughts....She was very racist, although she would probably not have realized so as a product of her time. The other thought was how little things have changed in Japan since her travels! Oh, of cou...

Things Mother Used to Make A Collection of Old Time Recipes, Some Nearly One Hundred Years Old and Never Published Before
by Lydia Maria Gurney

Cry Wolf
by Patricia Briggs
Really enjoyable, set in the world of Mercy Thompson, but about werewolves that live in Montana, under Bran's rule/care.

On the Prowl
by Patricia Briggs
I enjoyed this group of short stories. The first one is the best by a longshot, but the others have interesting ideas. Be aware that there is a lot of sex in the last short story and it is quite graphic. I would be interested in reading...