I woke up rather late this morning. It was still before 9, but a little closer than I want to admit. I got up, watched the news and got on with my day. I did a load of laundry and hung it up.

I watched a few things off the DVR, had lunch and then went out in the afternoon.  I told K that I was going to the Post Office and got my bike out and rode off.

I went to the bank quickly, then the Post Office and after that went to the drugstore.  I bought a few things at both places and then came back to the house.

F came back around 6:30 or so and started making the nabe right away. He was quite cranky and wouldn’t let me help him at all.  I tried, but finally, I just walked off on him.  When he was ready he came upstairs to change and basically told me to go downstairs and put the meat and tofu in the nabe.  Huh?  He wasn’t very polite about it either.

He ended up doing the meat and tofu and I got most of the stuff out on the table. We all ate, and it was very nice. The nabe turned out well. He’d got meat from a butcher today and it was really nice.

After we’d finished, I took the dishes to the kitchen and washed and dried everything. I finished doing all of the stuff and then I went upstairs.  F came up about an hour later. He did ask if I needed to go out before he cracked open his beer.  Luckily for him, I didn’t.

We spent a quiet evening. I watched a lot of TV tonight and really enjoyed it, F was on his phone or computer for a while before he went to sleep. I think he’s sleeping now.

I’m not sure what we’re going to get up to tomorrow. He was complaining about money earlier, which isn’t a great sign considering I need to get a few things for family Christmas presents. Sigh. I’m hoping to go and see a movie, but I don’t know if we will or not. Ironically, seeing the movie isn’t that expensive for the two of us, it’s the other things like popcorn and drinks that get expensive!

Oh…before I forget, in the morning, I darned in the ends of my doily. I haven’t blocked it, I’m not sure if I will or not. I should, I know, but do I have space? I’ll think about it! Here’s a picture of it. I think it turned out rather well. 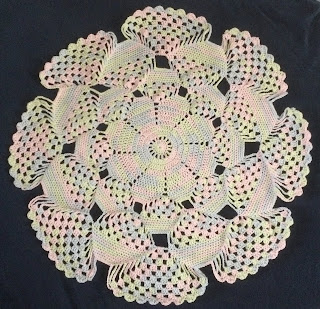 Come back later if you like and see what happens next. Until tomorrow….

Helen
I'm a Canadian married to a Japanese man living in a small Japanese city. Life can be either very interesting or very boring here!

The White Castle
by Orhan Pamuk
I didn't really like it. It started well, but got strange fast. It was a bit of a struggle to finish it. Not my cup of tea!

Unbeaten Tracks in Japan
by Isabella L. Bird
As I read this book I had a couple of thoughts....She was very racist, although she would probably not have realized so as a product of her time. The other thought was how little things have changed in Japan since her travels! Oh, of cou...

Things Mother Used to Make A Collection of Old Time Recipes, Some Nearly One Hundred Years Old and Never Published Before
by Lydia Maria Gurney

Cry Wolf
by Patricia Briggs
Really enjoyable, set in the world of Mercy Thompson, but about werewolves that live in Montana, under Bran's rule/care.

On the Prowl
by Patricia Briggs
I enjoyed this group of short stories. The first one is the best by a longshot, but the others have interesting ideas. Be aware that there is a lot of sex in the last short story and it is quite graphic. I would be interested in reading...